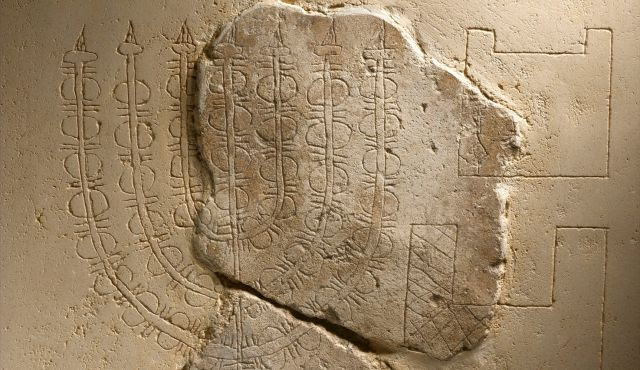 Since at least July 2000, when U.S.-sponsored peace talks at Camp David, Maryland, collapsed, soon to be followed by what became known as the Second Intifada,
the very existence of an Israelite temple in ancient Jerusalem has been a point of contention between Palestinians and Israelis. This is ironic,
since the principal reason that the place Jews call the "Temple Mount" and Muslims call the "Haram al-Sharif" ("Noble Sanctuary") is supremely holy to Judaism,
Islam and Christianity too is that it is where both the First and the Second Temples stood.

The New Testament tells of several important episodes in the life of Jesus that took place in the precinct of the Second Temple, and the Koran and other Muslim texts
refer to the Temple specifically and to the great holiness of the mount on which it stood. It is the very spot from which the Prophet Muhammad is said to have begun
his Night Journey to Heaven, in the 7th century.

The First Temple was built in the 10th century B.C.E. by King Solomon, according to the Hebrew Bible (1 Kings 5-9). But the sanctity of the site goes back hundreds
and possibly thousands of years before that.

The land on which Solomon built the temple had been acquired by King David, Solomon's father, who thought to build a grand temple himself.
But the Lord, according to the biblical story, rejected David's ambition because of the king's sins and the job passed to the son.

The land David chose, a threshing floor, was associated with Moriah, where the patriarch Abraham brought his son Isaac for sacrifice (Genesis 22:14).
(In the Bible, the mount is also referred to as "Zion," a name that eventually came to encompass the entire Land of Israel.)
That too is a tradition shared by the three great monotheistic religions. Other than that, and a few other minor references to the site in the Bible,
however, there is no obvious explanation why Solomon built his temple here.

What is clear is that the Temple was meant to be a permanent residence for the Ark of the Covenant (Aron Habrit), which held the stone tablets of the law
Moses received on Mt. Sinai, and [which traveled with the Israelites during their journey through the desert.

Temples were standard institutions in the Ancient Near East, and until the construction of Solomon’s Temple, it was normal, even among the Hebrews,
for individual localities to have their own altar or sanctuary.

Among pagan peoples, the temple would be the home of their god, who would be represented in the form of an idol. Among the Israelites,
the Temple was initially thought of as the literal residence of God, but God’s presence was intangible, at most a type of radiance called "kavod" in Hebrew.

As the conception of God changed from that of a neighborhood or national deity who had an address and needed to be placated, to being universal and omnipresent,
the sanctuary evolved from being the place where God lived to being the place that the people visited so as to offer service to God, in the form of sacrifices.
By the time of the final destruction of the Temple, the Jews, as they now could be called, no longer needed to "feed" God with physical sacrifices,
but rather could serve him with prayer and obedience to his laws.

No direct evidence for Solomon's Temple

The precise location of Solomon’s Temple -- the First Temple -- on the mount is not known, nor have any physical artifacts from it been unearthed by archaeologists,
though there are numerous artifacts portending to its existence (see the pictures gallery). Even if remnants have been preserved below-ground,
the fact that two Muslim shrines stand on the Temple Mount – the Dome of the Rock and Al-Aksa Mosque – means there is no possibility of Israeli archaeologists excavating there.

That being said, in 1999, the Waqf (the Muslim authority entrusted with the maintenance and functioning of the mount) began construction of an underground mosque in the
southeastern corner of the Haram, adjacent to Al-Aksa. When Jewish archaeologists observed that the large quantities of soil and detritus extracted from the site were being
dumped a little to the northeast of the Old City, in the Kidron Valley, they organized an ongoing project, called the Temple Mount Sifting Project, to go through the refuse systematically.

Large numbers of items that they date to the First Temple period have been found.

The Temple was meant to serve as a single facility for the United Monarchy, where sacrifices to God would take place, and where, in the Holy of Holies, an elaborate chamber in the
innermost sanctum of the Temple, God’s presence was said to dwell. After the single monarchy split into the distinct kingdoms of Judah and Israel, which happened, according to the Bible,
under Solomon’s son Rehoboam, there was again a duplication of temples, as new altars were erected in Israel, at Dan, in the north, and Bethel, in the south.

After Israel was conquered in about 720 B.C.E., and its 10 tribes driven into exile, Jerusalem again became the lone cultic center.

Solomon's Temple sustained several attacks by foreign powers before finally, in 586 B.C.E., being totally destroyed by the army of Nebuchadnezzar, the Babylonian king.
The residents of Judah were sent into a short-lived exile, in what is present-day Iraq.

With the fall of Babylon, the Persian emperor Cyrus the Great allowed the Jews to return to the Land of Israel, beginning in 538. A rebuilt temple was dedicated in 515 B.C.E. -
a little-known precursor to the grand structure called Herod’s Temple.

That Second Temple was an expanded and significantly upgraded structure whose construction was led by the half-Jewish, half-Edumean Herod, the Roman-appointed king of Judea who died in 4 B.C.E.
Finished in about 20 B.C.E., the extravagant edifice stood less than a century. The first Jewish Revolt began in 66 C.E. and in 70 C.E., the Roman general (later emperor) Titus looted the Temple and leveled it.

Following the destruction of the Second Temple during the First Revolt and the subsequent destruction of Jerusalem itself, accompanied by the exile of its inhabitants, during the Second Jewish Revolt,
in 132-135, that Judaism made a sharp turn from being a temple-based cult that relied on daily sacrifices to its god. It became a mobile faith that revolved around law and prayer, and whose members soon
spread out around the Mediterranean basin, and later to more distant points. The synagogue replaced the single Temple, but recalled the sanctuary by always being physically oriented in the direction of Jerusalem.
Prayer took the place of animal sacrifices.

Jews still mourn the destruction of the Temple, principally on Tisha B’av (the Ninth of the month of Av), the date traditionally associated with the destruction of both the First and Second Temples,
and other catastrophes that befell the people. But the Jewish longing for "Zion" evolved from being focused mainly on the loss of the ritual center of the Temple, to mourning over the loss of the land.
It therefore made sense that the modern movement dedicated to reestablishment of a Jewish national home in the Land of Israel called itself "Zionism."
Yet there remains a significant stream within Orthodox Judaism that aspires to rebuild the Temple, in Jerusalem, and to return to an era when Jews worshipped through pilgrimage and sacrifices.

An incised depiction of the Temple Menorah, found at the site of the Temple in the Old City of Jerusalem.Israel Antiquities Authority